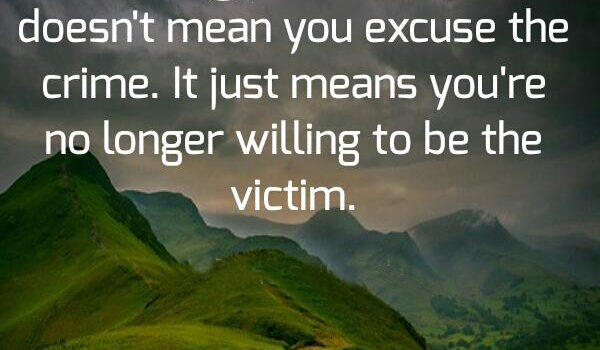 Why forgiveness is overrated

Let us ask the serious question which most people will avoid would you forgive a psychopath that keeps doing the same abusive tactics again and again. Unfortunately there is many out there that would forgive even though the abuse continues on unabated. There seems to be a denial that is growing in the mindset of humanity especially in the New Age Community that continuous psychotic harm can be negotiated with and forgiven. Lets take this in to proportion forgiveness does have it`s qualities but to what extent as do we forgive the most horrific acts and just let it keep happening or do we find a solution that will stop this behavior once and for all. You see many in the New Age community would rather run out in to the Flower Fields and preach love and forgiveness and talk about light, having no concept that their belief system is one of the main reasons psychotic behavior doesn’t stop.

There is many a reason why a individual has Sociopathic/Psychotic tendencies many can be treated and healed before it escalates out of control. For those who are to slick to be caught become destined to cause harm to society. Forgiveness will not stop this behavior in fact it will be majorly encouraged because the Psychotic personality will know it has free reign to do whatever they please without any ramifications whatsoever due to the naivety of the forgiveness zombies. There are many reasons for psychopathy as it is quite complicated and not necessarily allopathic in the mainstream narrative as you are lead to believe. This issue has been going on for many thousands of years as ancient belief systems recognized the spiritual aspect as well as the Physical contamination of an individual to become a Sociopathic/Psychotic calamity that will cause destruction if left unchecked.

There is a variety of Sociopathic/Psychotic personality types but the most numerous dangerous type is extremely cunning they are the best actors in society making themselves a chameleon in all situations they have masterful skills in manipulation and can imitate your sorrow and empathy. They are usually extremely charismatic and at times egotistic but they know they have to keep that in check otherwise they could be discovered.  In the mean time these individuals are laughing at you and your cohorts that you are so gullible and susceptible to their whims and charms usually with a charismatic smile but that smile is not meant to make you feel at ease of which it does that smile is of pure arrogance because they know how much of a sucker you are and how easily manipulative you have become.

The Sociopathic/Psychotic personality types are at times not stupid or silly people actually they are usually quite intelligent and will develop high social skills. It is fair to say that many of them in this modern day and age have unfortunately climbed the ladder in to Corporate success or in high Governmental positions as it currently seems that this unhuman system that has been created around us rewards the most manipulative personality types which is detrimental to the survival of the human species.  My advice to those who want to listen on how to spot these type of unnatural humans is to watch, observe & listen and always take a person for their actions and not what they say as words are cheap and manipulative as we already know how politicians rarely speak the truth and usually do the opposite of what they say. Overall the statistics say that 5% of the people on this planet have a Sociopathic/Psychotic personality type then how is it that these people rise to the top well the answer is the New Age Bullshit forgiveness model which we have already stated this is one of the main reasons the world is what it is today.

Copyright 2018 www.healingenergetics.com.au All rights reserved. This website is made by the living man Without Prejudice. Healing Energetics use regulatory standards.